Our first meeting was held on 7th March at the Café Domenica.  This is a new venue as we said we would support local independent place.  Team Domenica is a three tier operation. They provide unique support to the young learning disabled to develop skills, access employment and play an active role in local communities.

6 of us attended the meeting and we were happy to welcome another new member to the group. 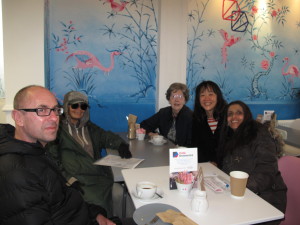 We are very pleased to welcome our new committee to host the Lupus group coffee and chats on Friday mornings once a month. We have new team, a new location and new day!

We look forward to you joining us at Cafe Domenica on our first meeting of 2017 on Friday 10th March at 11 am.

You may have heard in the news recently about the success that some people with Multiple Sclerosis (MS) had, following a clinical trial at Sheffield’s Royal Hallamshire Hospital. It was reported that the trial was so successful that some of the patients were able to walk again.

The treatment was the subject of a recent Panorama programme- Can you Stop My Multiple Sclerosis? and involved the patients first undergoing extensive chemotherapy to destroy the parts of the immune system that cause MS. They were then treated with stem cells derived from their own bone marrow, which had the effect of resetting their immune system to a time before the MS.

This therapy is called AHSCT (Autologous Haematopoietic Stem Cell Transplantation) and was first used in leukemia patients in Baltimore, USA where Dr Richard Burt noticed that children who received this treatment lost all their immunisation immunity and he realised that this could have an application in the treatment of autoimmune diseases like MS, lupus (SLE), diabetes type 2 and Rheumatoid arthritis. In 1996 he carried out the first transplant on an MS patient and in 1997 he carried out his first transplant on an SLE patient.

Dr Burt’s AHSCT treatment in Chicago, for patients with severe lupus, in some cases was very successful (as the Lupus Foundation of America reports). They say that the early research (2006) has been promising with half the patients remaining disease free after 5 years and you can read some of these patient’s stories on The Northwestern University of Chicago’s DIAD website. There’s also an interesting talk by Dr Richard Burt there.

The Royal Hallamshire’s most recent study using AHSCT to treat MS is linked Dr Burt’s work and forms part of an international randomised trial he’s begun (MIST). The results were impressive; in 123 people with relapsing, remitting MS, the AHSCT treatment was linked to a 64% reduction in the level of disability, 80% of those treated had no relapses in 4 years and 87% had no worsening to their level of disability.

However, this treatment is still extremely experimental and carries with it significant risks. In America lupus SLE patients will only be considered for stem cell trials if all other forms of treatment have failed i.e. it’s a matter of life and death. The chemicals used are extremely toxic, the treatment challenging and complications such as infections can lead to long hospitalisation. The therapy is very radical and there have been a small number of deaths due to treatment related complications. At £30,000 for each treatment, it is also expensive and it will be years before the long term success or side effects are known.

That said these findings for MS patients do seem to offer real hope for the treatment of all autoimmune diseases in the future.

For those not working you may like to know (if you don’t already) that you’re exempt from the 20% tax paid on any interest earned on your savings. This is normally taken automatically at source.

This also applies to many low earners i.e. anyone earning less than £15,600 a year (income and savings interest combined) won’t have to pay any tax on the interest gained on their savings.

You can claim this tax back by completing an R40 form which you can download online from the HMRC website or call:-

In order to prevent tax being taken from your savings interest in the first place (e.g. if you don’t work). You should complete form R85 and give it to your relevant bank or building society.You can make a claim for a tax refund for any of the previous 4 years, but after that it’s too late.

More information about claiming tax on your savings (or to find out if you’re entitled to a tax refund if you’ve had to stop work) can be found either through the HMRC website or by calling the savings helpline on 0300 200 3312.

Some people with lupus live with chronic pain, caused by the inflammation that SLE can produce in our bodies. Living with chronic pain can be very difficult and pain killers are not always the answer.

Vidymala Burch suffered two spinal injuries at an early age and has lived with chronic pain ever since. As a result of her experience and following a physical breakdown at the age of 25 she eventually developed a social enterprise called Breathworks where people with chronic pain take an eight week course to learn how mindfulness could help them to cope better with their physical

Her book- Living Well With Pain and Illness is a useful guide to this approach.

If you visit her website you can also find some free meditations there (if you give your name and email address) to try.

Breathworks courses, (including an online one on her website for those who may be unable to attend in person) are run all over the country. The next one in Brighton is a 6 week course starting Wednesday13th April, 10-12.30pm at the Brighton Buddist centre, 17 Tichborne St., Brighton. The cost of the course is £110/£150 which includes the book- Mindfulness for Health by Vidyamala Burch and Danny Penman. If you’re interested then you can contact ratnadakini@gmail.com who runs the course for more details.

The BBC also had an interesting programme on radio 4 which looked at ground breaking research into relieving chronic pain.

The Problem with Pain- A Slow Motion Catastrophe.

This was our first Lupu 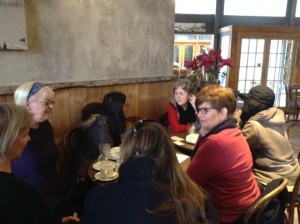 s Brighton and Hove
coffee and chat of 2016. Eight of us met up and we were happy to welcome a new member. It was a great meeting, discussing different medications and treatments, as well as, ideas for a summer event.

We had a very successful Christmas meal at Cote Restaurant. Fifteen of us went along to what turned out to be a lovely meal. We all enjoyed getting together and this was a really good way of marking the end of 2015 for the Lupus Brighton and Hove support group. We have photos of the event on the Gallery page of our website.

Thank you to everyone who supported Lupus Brighton and Hove by putting your green tokens in the Community Matters box at Waitrose, Western Road, Brighton.

We had a fantastic result, receiving just over a third of this month’s Waitrose Coummunity Matters fund, which is very gratefully received and will go towards paying for things like our website hosting, administration costs and group events.

We’d particularly like to thank Terri Gibson for nominating our group for the Waitrose Community Matters scheme and without whom we wouldn’t have received this very generous donation. 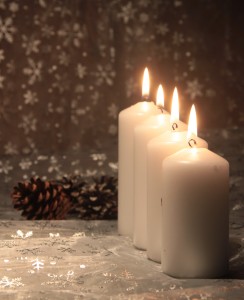 lowing our Christmas meal on the 4th December, Lupus Brighton and Hove takes a winter break to give us all a chance to recharge our batteries, which we think is important (as I’m sure you’ll appreciate) as we all have Lupus.

Our next Lupus Brighton and Hove coffee and chat will take place in 2016 on the 18th February. We look forward to seeing you there at our new venue- Cafe Arcadia on our new day- Thursday.

If you need any support from the group over the Christmas break please contact us by email and we’ll do our best to help. In the meantime we wish you all a very Happy Christmas and a healthy New Year!